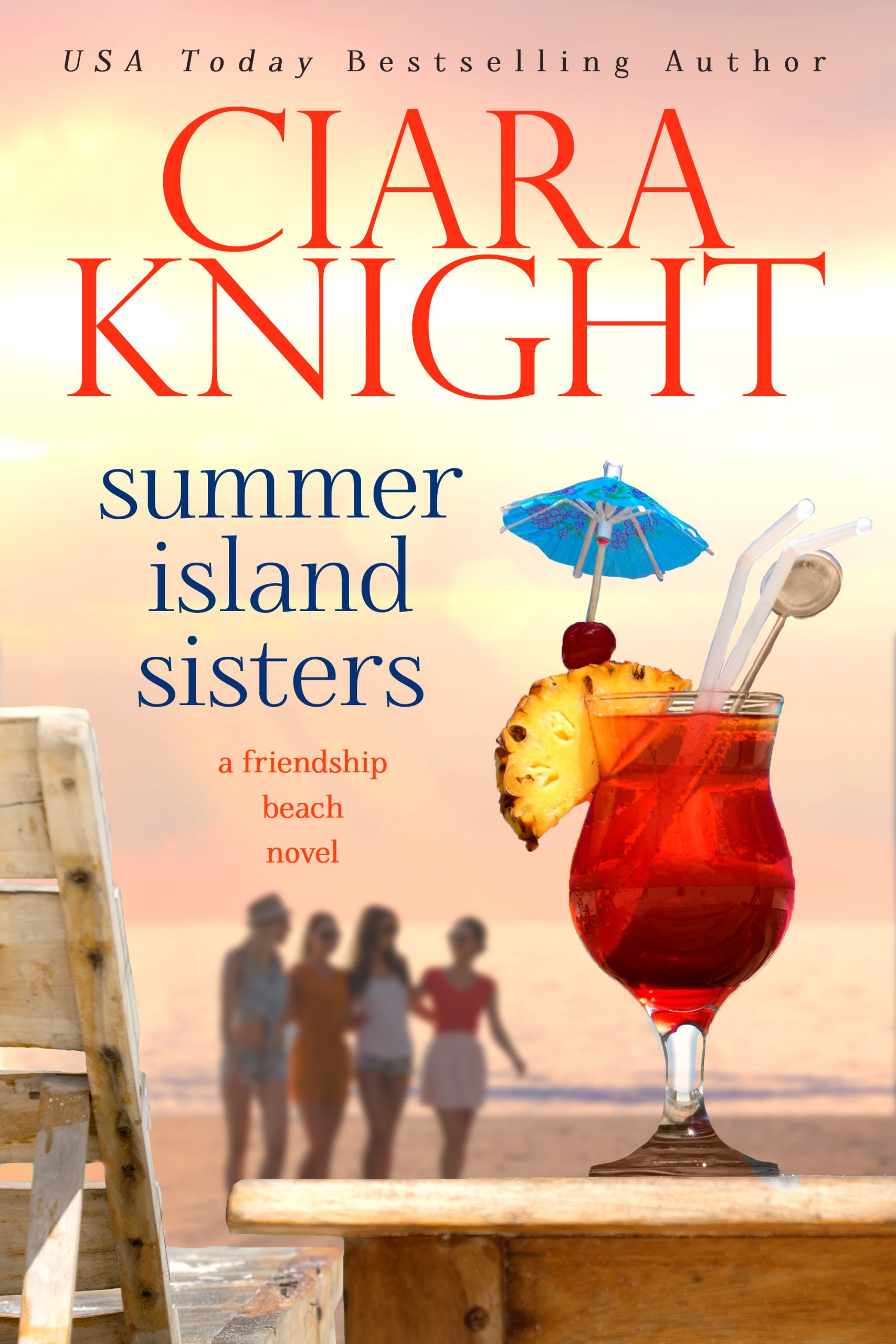 How could a single word carry so much meaning? To Trace Latimer, it meant childhood, friends, a feeling of being able to take on the world. And she had, even if she’d failed.

The broken gravel road pressed into the bottom of Trace’s worn hiking sandals.

Julie “Jewels” Boone, Trace’s best friend since forever, threw her arms around her. “Are you ready for an exciting spring break?”

Trace stumbled over loose pebbles, but Jewels caught her. The way she always had when they were kids. If only she would’ve been there to catch Trace before she’d fallen into the epic mess that kept her away so long. The mess that cost her saying goodbye to her father before he died.

“Kat and Wind should arrive tomorrow. I think Bri’s more excited than I am to have some girl power in her life.” Jewels flexed her bicep like the 1940s Rosie the Riveter poster.

Her childhood friends, Kat and Wind, plus Jewels’s daughter Bri would be a much-needed distraction from real life.

Waves crashed into the cement wall at the edge of the riverbank near the junction to the Atlantic Ocean as if in warning of an approaching storm. “How’s Bri doing with her writing?”

Jewels shrugged. “Still working with an agent to edit the story. People want to read about midlife women and their friendships and romance. Who knew?”

Trace shoulder bumped her. “We’re not in our dotage you know.”

“Speak for yourself. You haven’t hit the big 5-0 yet.” A seagull applauded her dramatics with flapping wings and squawking. Obviously Jewels had taken a page out of their theatrical friend Wind’s screenplay.

“Nope, still forty-nine. I’m the baby of our friend family. You, Cat, Wind, and then me. The youngest sister.” Trace used to hate being referred to as the baby of the bunch, but now she embraced being the youngest. Funny how perception changed over the years.

The puffy clouds parted, allowing golden rays to shoot to the ground. Trace embraced the morning warmth on her face and her friend at her side. Did she deserve such comfort when she’d caused so much pain?

Jewels paused only a few steps from the sand, still in tune with Trace after all these years. “Hey.”

Trace saw the tell-me-what’s-wrong glance and shifted into avoidance. “I’m so happy I’ve had the chance to get to know Bri better. It’s a shame all of us were apart for so long.”

Jewels looked down her perfect nose at Trace, waiting for more.

Trace longed to fall on her knees and confess to her best friend the sins of her past. About her assistant Matt and how her distraction with oil tycoon Robert Remming had cost Matt his life. Her stomach dipped and dove into the queasy pit of regrets.

Thankfully, Jewels didn’t press the subject. At the edge of the broken road, they slipped off their sandals and stepped onto the beach. The sand between Trace’s toes soothed and welcomed her to the small beach at the edge of Banana River. A stark contrast from the hard and dangerous oil rig she’d left behind weeks ago.

Images of corporate corruption and confrontation and cold hard truths flashed. The hair on Trace’s neck prickled like a porcupine fish.

“But we’re together now. I’m so excited to have Bri and you home with me.” Jewels slid her arm into Trace’s.

Trace didn’t like too much physical contact. It made her uneasy. Perhaps it was from growing up with no mother or sisters.

“You don’t mind that she gave up her fancy career to move back to Summer Island?” Trace treaded more carefully in conversation than through the sand.

Jewels sighed, the way only a mother who loved her daughter could sigh. “Honestly, I don’t care. I love having her here. I tried to push her out of the nest because I was trying to live vicariously through her. In the end, I realized my small-town life wasn’t a letdown compared to the grand living you and Kat and Wind have experienced, but a gift.”

“You have no idea.” Trace bit her bottom lip, but it was too late. The words had already spilled out into the world. She held her breath, waiting for Jewels’s onslaught of questions, but to her relief, Jewels was lost in her own thoughts.

“This change in career makes her happy, so I’m glad she gave up her big-time job for a simpler life with me.”

“Family’s important.” Trace took in a breath of salty air with a hint of brackish odor from the nearby canals. The smells coated her senses and fueled her guilt. He was gone.

“I’m sorry your father passed away,” Jewels whispered, as if saying it too loud made it hurt worse.

Jewels beamed with that new-love look. “I’m glad we’re both moving on.” She slowed her pace. “Are you sure you’re ready to face your childhood home? You’ve been through a lot lately, and I’m afraid you’ll be disappointed when you see how run down it is.”

What did she mean a lot lately? She couldn’t know what happened. “It’s only been a year since I was here last. I’m ready.” Wanting to change the subject to avoid the gnawing pain that she hadn’t been here for her father when he had died, she quickened her steps. “How’s Friendship Beach?”

“Nice avoidance.” Jewels stopped dead a few feet from the backyard of her new boyfriend’s place. “I know Trace Latimer doesn’t discuss emotions and feelings, but I want you to know that I’m here if you need me.”

Trace stiffened. No way she’d open that ocean-filled Pandora’s box of ragged and jagged emotions. “So Bri and you haven’t kept up the beach like you promised?”

“I heard you, okay?” Trace snugged her arm tighter and hip bumped her. “Not now.”

Even if she wanted to, she couldn’t talk now. Not when gag orders and secrets sealed her mouth. Not when she’d been the cause of so much pain. Not when she was looking for respite in her life.

Jewels took the hip hint and sauntered toward her boyfriend’s backyard. “Trevor won’t step foot on Friendship Beach without express permission from you, Wind, and Kat. He says he won’t mess with the Summer Island Book Club if he wants to live.”

Trace paused at the edge of the docks that served as Trevor’s new chartering business and looked to the other side of the channel. She spotted the little peninsula with jagged rocks that protected the lagoon. The overhanging mangroves hid the entrance to the tiny canal and their personal, private, protected hideout since childhood.

Relieved that they’d restored the beach area a few months ago, she felt a pin-prick of success, but it was hidden beneath the open wound of losing the big battle in Brazil. She shook off the memory before it took hold and stowed her grief. Feelings were meant to be experienced, not talked about. “What do you think we’ll do this week besides our book club?”

“Wind has all sorts of nonsense planned with theatrical games and girl time. I think she needs something to focus on since her Broadway show was cut. She’s searching for a new choreography job.”

“I’m not putting on a costume and performing for the town.” Trace snickered, but it was more of an exhausted chortle than humor. She was midlife, yet fatigue made her feel end-of-life.

“You know it’s your turn to pick the book, right?” Jewels said in an I’ve-got-a-secret tone.

“No, seriously? I’m sure Wind will take this year.”

“Nope. All you.” Jewels tugged her toward the path that led to Trace’s childhood home.

A pelican swooped in and grabbed a fish. Trace watched the natural order of things and shook off the feeling she’d been a minnow in shark-infested waters when she’d taken on the oil giants. She’d been so sure, so strong, so stupid.

Jewels released her but didn’t stop the analytical gaze on her face. “Listen, you can stay with me for as long as you like.”

Then she shouldered Trace. “Come on. You’ll bounce back. Trace Latimer’s a fighter for sea otters and whale sharks and all things living. Except for herself.”

“What’s that supposed to mean?” Trace stopped at the edge of the yard not far from her path, the one from her childhood. She’d loved every minute of her tomboy, no shoes or rules kind of upbringing.

Jewels looked to the puffy white clouds that promised a gorgeous day. “Listen, you take on fights for everyone else, but when will you fight for your own happiness?”

“Just because you’re in love doesn’t mean I have to be, too.” Trace stepped onto the cracked asphalt patch filled with erupting roots at the edge of the broken-down hotel at which she’d worked as a maid while in high school. Its crooked shutters and dirty windows made it look haunted with past memories. Memories that would be destroyed by the renovating and modernizing of the hotel by Trevor’s best friend, Dustin Hawk. The hunk-of-a-mess Trace wanted to stay far away from. “You’re the settle down type. I’m the keep moving type.”

“That’s it, you keep moving. Why don’t you ever stop?”

Trace halted her steps at the end of the white sand beach that appeared to be cleaned up, despite the lack of use from hotel guests. “I’ve stopped now. There’s a fight here on Summer Island. I’m home, and I’m going to fix up my old house and live there while I fight Dustin on turning the old hotel into some trendy, touristy condos that look out of place in Summer Island.”

Trace lifted her chin. “I filed a stop order due to historical reasons.”

“You didn’t.” Jewels sighed. “I love having you back here, but do you have to stir up trouble with my boyfriend’s best friend?”

A twinge of guilt pinched her chest, but she couldn’t give in to the businessman-without-a-heart type again. “Sorry about that. I’m not trying to stop him, just keep him from ruining our town. I’m staying for a while to make sure he doesn’t do anything to hurt Summer Island. Trust me, I know the big business types.”

“Fine, but you’re staying with me. You don’t need to live in your childhood home.”

“The house is on the most beautiful spot on the island, so I’ll fix it up and enjoy the view. I’ll even tear down the old shack in the woods we used to play in as kids. That will give me a clear line of sight to keep an eye on Dustin Hawk. Once I figure out where to go next, and the hotel’s finished, I’ll use this place as a vacation escape to come home for book club and my friendsters.”

“Haven’t you read your own daughter’s book? That’s what she calls us. The friends that are more like sisters—friendsters.”

“It must have been added to one of her revisions, because that wasn’t in the original I read.”

Trace pushed back branches of overgrown shrubs, shuffled through weeds, and hopped over downed tree branches to find the overgrown path to her property. “Aren’t you the one who pressured me the last few months to come home and take up my fight here?”

“Yes, but not this way. Not when you’re upset over what happened. Not when you insist on moving into a place that doesn’t have air conditioning. You need to stay with me.”

The uneasy sound of her voice made Trace decide she needed to shut down everyone tip-toeing around her for the next week, worried about her facing the death of her father and why she’d left her work behind.

She halted at the sign written in bold red letters nailed to the front door.